Being constantly on-the-go can become a stressful experience for many people. However, taking a quick break from a hectic day to play a small browser game is often a good idea. There are so many to choose from that everyone can find one to enjoy.

One simple small browser game that can be played anytime is called 10 Bullets. The game gets its name due to the fact that players only get 10 projectiles. The projectiles are then used to shoot aircrafts out of the sky. Players will find that the only way to beat this game is to aim their projectiles in a way that their shots cause debris that shoots down other aircrafts. However, since players have so few moves to use they can easily sneak this game in during their workday.

For a completely different type of small game, players can turn to A Dark Room. This is a very simple game that only involves building a virtual wilderness community by doing nothing more than choosing blocks of text from a drop down menu. While this game cannot be completed in a short amount of time, players can save their progress on their web browser and resume the game whenever they wish to do so.

Candy Box and its sequel, Candy Box 2, are small games that break the mold of the typical small game. The game starts out by giving players the option of eating their candies or tossing them on the floor. Candy Box 2 takes it a step further through its RPG feature. Players start the game by purchasing weapons that they can then use on their quest through a danger filled village. For a certain generation of gamblers, it is reminiscent of the Commodore’s games. 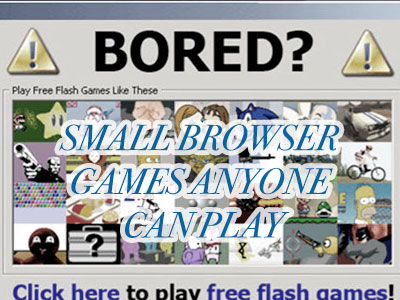 Game of Bombs is another small browser game. This multiplayer game has a retro feel to it that is irresistible to many. The idea of the game is to wander around setting bombs off in order to eliminate monsters as well as the walls that serve as barriers. Once the bombs have been released, the key to success is to avoid them and collect the carnage they leave behind. This is a popular group game that encompasses players throughout the world.

Good Impression is a quirky game that throws players into an all too familiar scenario for most. The premise of the game is quickly straightening up due to the arrival of an unexpected guest. Players are given three minutes to straighten up the room as much as they possibly can. At the end of those three minutes, players are graded based on how well they cleaned and straightened up.

Invader Overload is a new take on the classic Space Invaders game. The premise of the game is that players can use super weapons to not only kill the aliens, but battle their bosses as well.

These small browser games and many others like them provide a quick escape from the daily grind.